skip to main | skip to sidebar

For what may be the only September installment of the Breakdown, I have decided to highlight the standout track from a few rather forgotten 80's 7" EPs. All the bands spotlighted in today's post were proudly and without question influenced by the sounds of 60's rock, but in three completely different ways.

The Cracked Jaffers - "Greatest Mistake" from the Drop In EP

The band is Australian, but the sound is pure west coast jangle with harmonica straight out of the Sunset Strip '65. The playing is comfortably inept, from the eager if labored guitar solo to the way the 3rd verse vocals go deep into the red - in other words, what they lack in musical chops is made up for with earnest sincerity. The flipside features inspired covers of New Zealand's La De Da's debut 1965 single, "Little Girl" and the Motown classic and garage band standard, "Leaving Here." While again the playing is not top-shelf, the energy is undeniable and ultimately infectious. One gets the impression that an evening spent in a crowded Melbourne pub circa 1987 with the Cracked Jaffers playing was a night well spent and one to remember. Unlike many bands on the blog, the Jaffers followed up this EP with a full-length album and at least another 7". Still, they seem to have become a somewhat forgotten mainstay on the highly regarded 80's Aussie garage punk scene, and worthy of rediscovery.


From the prolific and still-running Boston-area label Stanton Park comes this 1982 neo-psychedelic oddity, featuring label owner Aram Heller, later of more well-known 80's psych outfits World of Distortion and Plan 9, on vocals and guitar. Most of the 4 tracks on the EP are in an almost Zappa range of non-rock silliness, but patient listeners are rewarded with the closing track heard here. Things get off to an exciting start as a slowly building drone of overdriven guitar explodes into a heavy acid riff and go-for-broke drumming, while an acoustic rhythm guitar adds texture beneath the storming battery. The inspiration is clearly Pink Floyd of the Syd Barrett era, in fact the other EP tracks with their playful lyrics and fey accompaniment could be said to cop the sound of Syd even more - but while the band is able to re-create the sounds of London 1968, the vocal and lyrics are undeniably teenage prep-school punk. This is hardly a bad thing, however, as the contrast creates a distinct sound that sets it apart from some of the more straight-forward copycat bands working this genre in that era on Voxx and the like. More Trodds material has since been made available to the public, but I'm pretty sure this was their only original release.


Finally, we have Golden Bats, a band that brings a 60's inspiration from the early days of the decade, when the influence of early rock & roll and rockabilly were still strong, if not generally as eager and unbridled as it's 50's roots. I picked up the EP on the basis of the label alone, Wasp Records of Virginia, who released the masterful power pop LP by the Strand not long after this. The good-time rock and roll elements can wear on you quickly with the other 3 tracks from the EP, but the song posted features an edgier vocal and some very pleasing chord progressions. Apparently my copy is missing a picture sleeve that should have been present, and would have helped dress up the post with a little more flash.

Steven Priest, founding member and bassist of glam legends Sweet, produced this 1980 7" from New York City boys The Hits, and it is apparently their only release. "Count on You" is strong anthemic power pop that falls squarely in the sound of it's year of recording, while "All the Girls" draws on an earlier influence of the New York Dolls/NYC glam scene which took inspiration from the uniquely NYC sound of early-mid 60's girl group records. "All the Girls" is ultimately the more interesting side, with it's turn-of-the-decade blend of 70's glam and 80's new wave, but both songs satisfy, and it's a shame that we don't have more recordings of The Hits to remember them by. Vocalist Mikael Kirke remains active in music (and appears to have been a writer on music for soft-porn mag Oui back in the 80's), and is reportedly working with Steve Priest again on a solo effort as I type this.

Both sides of the single are available for stream/download below, and I've also posted a video of them performing a third song, "Survivor," on the Flo & Eddie TV show further down. A video of them lip-synching the single on the legendary Uncle Floyd Show is easily google-able as well, and includes a great interview with the band, including them promoting their upcoming appearance on a WNEW spotlight that appears to have landed them the Flo & Eddie gig. Worth finding although the aped performance is hard to watch.

Certainly the regional power-pop era of the early 80's must stand as one of the most nelgected of modern music for rediscovery and reissue. Countless best-forgotten demos from teenage garage bands of the 60's and cassette-only crude efforts of the most inept punk groups receive deluxe 220-gram LP reissues with gushing liner notes and a write-up from the most posh mags and blogs, while the best albums and EP's of the power pop scene, some of which were genuine hits in their native region, go neglected and known only to those lucky enough to stumble across a copy of the original release. Of course, it is understood that the dominant power pop of this era was released on 7", and many if not most of the best stuff has long been reissued on mixtapes and comps like the Teenline series and others. But when albums from groups like D.C.'s The Strand, The Late Show of Indianapolis, and today's featured band, Minnesota's Crash Street Kids, go without ever having been issued on CD or re-released in any format, then something is clearly wrong here.

Crash Street Kids are the perfect example of local heros who should have broken nationally, but never got the exposure outside of their hometown that they deserved. Endless gigging throughout the Minneapolis area and various midwest locations built them a strong reputation and a devoted fanbase in the early 80's, resulting in one release, the fantastic Little Girls LP for the Fat City label in 1982. Like all the best power pop, the songs mainly deal with dating, sex and masturbation. While the fantastic songwriting, playing and production of this album may have never received the attention it was due outside of Minnesota, the influence of Crash Street Kids can clearly and without doubt be heard in the later recordings of fellow Minneapolis legends The Replacements. One listen to this album will convince you Paul Westerberg took his vocal cues from Melvin James, who we can assume Westerberg must have seen and maybe even supported live with the Replacements at some point in their early days together.

As previously stated, this album has gone strangely unissued in any format for the 27 years and counting since it's initial LP release. Copies sell on eBay for decent money, although the typical going rate of $40 certainly seems reasonable for an out-of-print seminal release such as this. I've ripped 2 of my favorite tracks for your use below, and more tracks from the album can be streamed at an unofficial fan page here.

Now, SOMEBODY dig up the master tapes, some live tracks, and the "Mystery Girl" video(!), and give this legendary album a proper repressing!

Might as well kick it off with some color-coordination. Subs were from Scotland, and apparently didn't last long past the pressing of this 1978 single, their only release. Stiff went to great pains to label it a "One-Off" release, either to hype it in some way, or to distance themselves from it. Both songs are great, the A-side a nice mix of anthemic pop and stoned contempt, but the flip, "Party Clothes," takes the badge from me with it's chunky guitar, infectious rhythm, and tender lyrical support for the singer's fashion victim girlfriend.
Hear both sides below.

(A) GIMME YOUR HEART:

A blog for those with the pop jitters. Think of this as a handful of pills that control those twitches. Angular rhythms, pop hooks, harmonies with a snarl, retro fuzz blasts and more. Updated frequently with whatever fits the bill that day, but rest assured it all falls under the same prescription. 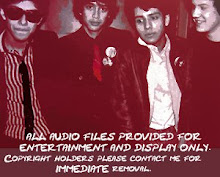